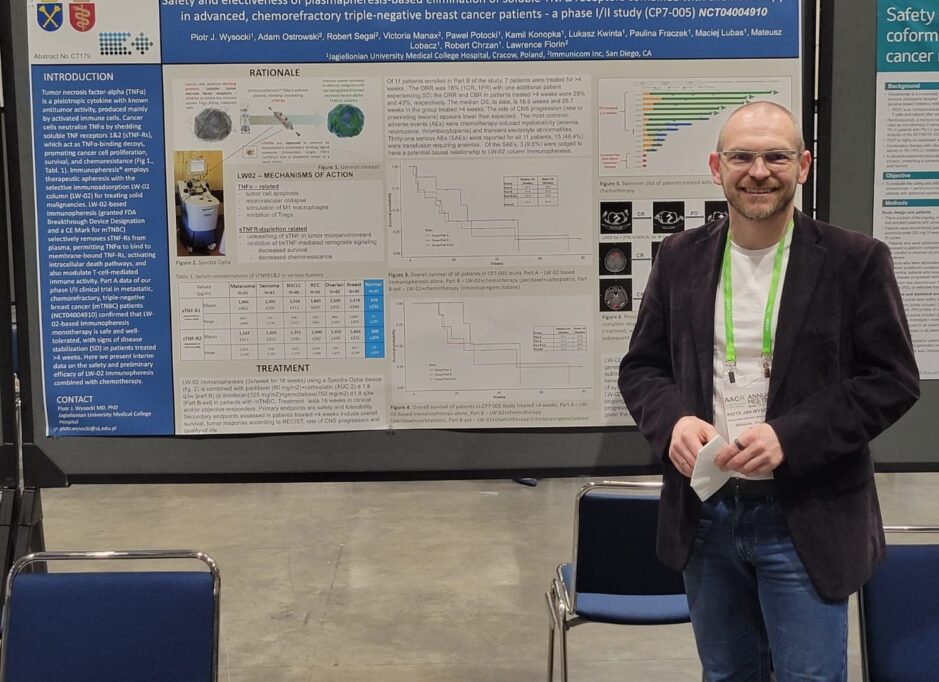 As a measure of response, the clinical benefit rate (CBR) for patients receiving Immunopheresis treatment for greater than four weeks plus chemotherapy was over 40%, and the rate of central nervous system progression, new or preexisting CNS lesions, was observed lower than expected

Expanding on Part A data where LW-02 Cartridge Immunopheresis® was used as a monotherapy, results from Immunicom’s Part B & Extension, where Immunopheresis was combined with various chemotherapy regimens, continued to demonstrate effectiveness, safety, and tolerability.  Median overall survival (OS) extended beyond six months in patients treated greater than four weeks.  In addition, the incidence of brain metastases appears to be less than would otherwise be expected in this heavily pre-treated mTNBC population, and further analyses are underway to confirm this observation.

Commenting on the data, Dr. Wysocki stated, “We are seeing further confirmation that Immunopheresis is a potentially revolutionary treatment for cancer. In these difficult to treat late-stage cancer patients, the possibility of extending survival and preventing spread of the cancer to the brain, which is common in these patients, is especially promising and opens a new playing field in the battle against refractory cancers. Our longest surviving patient who had progressed three prior lines of treatment before being treated with Immunopheresis therapy, had a robust response to treatment that lasted nine months. For this patient, disease progression occurred with reduced frequency of LW-02 Immunopheresis treatment, but a robust response was again observed on increasing the LW-02 treatment to three times per week, demonstrating the ability of LW-02 Immunopheresis therapy to produce a durable and sustained response now out to over 18 months.”

Immunicom’s AACR presentation underscores the burgeoning prospects for the Company’s Immunopheresis technology platform on multiple fronts in the fight against cancer and other immunologic disorders. The LW-02 Cartridge has received FDA Device Breakthrough Designation for treatment of solid malignancies and a CE Mark in Europe for use in chemo-refractory mTNBC. Three ongoing clinical trials continue to assess LW-02 Cartridge Immunopheresis as a monotherapy and/or in combination with chemo- or immunotherapy, with others planned to initiate later in 2022.

Subtractive Therapy – Immunopheresis® and the LW-02 Cartridge
Immunicom employs a proprietary, high-affinity, molecular capture-ligand binding matrix within the LW-02 Cartridge to remove specific cytokine receptors, soluble TNF-Receptors 1 and 2 (sTNFR-1/2), that are shed by cancer cells into the extracellular tumor microenvironment. sTNF-Rs serve as decoys, binding tumor necrosis factor alpha (TNF-α) before it can bind to its membrane-embedded sTNF-Rs receptor to trigger several cell death pathways. The selective removal of decoy sTNF-Rs by the LW-02 Cartridge also unleashes the patient’s immune system to identify and aggressively attack the cancer.

Immunopheresis, like dialysis, is a subtractive therapy that occurs outside the body, in contrast to conventional drug and biologics that are infused into the patient. Immunopheresis is thus much better tolerated than chemo- and immunotherapies, allowing for its use as an adjunct with these therapies, possibly in lower doses to reduce their toxicity.

Immunicom Announces Addition of Key Industry Leaders to Board of Directors

Immunicom’s Immunopheresis® therapy, including the LW-02 blood-filtering immunotherapy device, has not been approved by the US Food and Drug Administration and is an investigational therapy in all of Immunicom’s ongoing clinical research studies. Immunicom’s LW-02 blood-filtering immunotherapy device has been granted European CE Mark Certification for use in adults with advanced, refractory, triple-negative breast cancer in Europe.

We use cookies and similar technologies to enable services and functionality on our site and to understand your interaction with our service. By clicking on accept, you agree to our use of such technologies for marketing and analytics.